Autonomous navigation can be confusing. Here we dispel the most common myths about BlueBotics’ ANT® navigation technology, starting with that SLAM question…

BUSTED: ANT® natural feature navigation does not use SLAM during navigation. In fact, almost no autonomous navigation solutions use SLAM for navigation itself. Instead, most technologies – including ANT® – use SLAM just once, to create their initial site map.

To break down this myth, we must first explain what SLAM navigation is. Simultaneous Localization and Mapping (SLAM) is an algorithmic approach, which is used by most types of natural navigation technology to construct a map of an environment. This map is then used by automated guided vehicles (AGVs) to calculate their position and navigate through that environment.

With natural navigation technologies, in most cases SLAM is only used to create the initial reference map of a site. This process takes place during the commissioning (installation) of the site’s first AGV.

In some rare cases, however – with some ‘scan matching’ versions of natural navigation – SLAM is used to both construct and then regularly update a grid-based map of the environment. This approach creates challenges in terms of accuracy and repeatability since updating the coordinates of structures in the map makes it extremely difficult, if not impossible, to guarantee a stable setup. This updating-the-map approach is also demanding in terms of the wireless connectivity required on-site, since every time the map is updated it must be downloaded in close to real-time from a central server by every vehicle in the fleet.

With Autonomous Navigation Technology (ANT®) by BlueBotics, this is not the case. SLAM is used only once – during the initial creation of the site map.

Here’s how the map creation process works with ANT®:

Since only original, permanent features are used as references to calculate the vehicle’s position, this guarantees high precision over time – there is no chance of measurement errors creeping in and compounding. The map is never updated. It never changes.

For example, the very first ANT® driven vehicle ever installed – an Esatroll Paquito AGV commissioned at Dal Colle (Barilla Group) in Italy in 2009 – still performs its missions using its original site map! The permanent structure of the building has not changed, so the map didn’t need to either.

Let’s be clear. It is not at all easy to ensure the repeatability and reliability of an automated vehicle’s operations using natural feature navigation. However, ANT® achieves this, repeatedly over time and without loss of accuracy.

With ANT® navigation, a vehicle’s exact position in the map is determined using ‘feature matching’ (matching permanent references in the map to the vehicle’s laser scanner data) and odometry, used to measure the vehicle’s change in position by computing its movement. A feature matching approach works well, in part, because features like segments of wall and pillars are highly distinctive, in terms of the specific size and angle of each. This means they are easy for ANT® to identify and successfully match.

By contrast, most other forms of natural navigation work at the level of laser measures (i.e. points). These are stored in a grid map and used to match a vehicle’s laser’s measurements during operation (so-called ‘scan matching’).

Put another way, ANT® is working at a higher level of abstraction: rather than working at the level of laser measures (points), it is working at the level of structures (walls, pillars etc.). This makes ANT®‘s matching process, and its map, more robust and resilient against dynamic changes in the environment. Because there are no temporary objects being mapped – remember, these are removed from the map during commissioning – a potential contributor of compounding positioning errors is removed. If the permanent ‘natural features’ used for vehicle positioning do not change, there is no reason for the accuracy of an ANT® driven vehicle’s operations to degrade.

When our team at BlueBotics speaks to longstanding customers about their analyses and tests of different AGV guidance technologies, the robustness of ANT® is the reason many give for selecting and retaining BlueBotics as their navigation partner of choice.

When it comes to moving autonomously through an environment, AGVs and AMRs driven by natural feature navigation tend to use one of two modes:

ANT® navigation offers both approaches, but which is the most efficient? It depends on the application.

With service robots such as Cleanfix’s robotic floor scrubbers, these need to cover every inch of ground in a defined area, but the order in which they cover it is not so important. And in the places where they work, like commercial centres, there are plenty of obstacles such as people milling around. In such cases, an obstacle avoidance approach is a great fit.

However, in industrial applications where AGVs are being used to automate material handling tasks, it may seem counterintuitive but most often the ‘stop and wait’ approach used by virtual path following is the most efficient.

BlueBotics’ CEO, Dr. Nicola Tomatis, explains: “Even with perfect obstacle avoidance, if your AGVs or AMRs have to move around objects, that slows down their progress compared to path followers, where the staff is trained to keep routes free.”

In addition, full obstacle avoidance makes optimal traffic management close to impossible, meaning the performance of an entire fleet could be highly degraded by the freedom of a single vehicle using obstacle avoidance.

Dr. Tomatis comments, “Consider the feedback we received recently from one customer, a North American AGV manufacturer. One of its customers, a tire manufacturer, previously operated a fleet of 37 AGVs, all of which used obstacle avoidance. When the company decided to retrofit these vehicles, however, it went with pure path-following ANT® navigation in tandem with ANT® server fleet management software. The tire company actually installed seven fewer AGVs in all. But the 30 it now uses have proven to be 10% more productive than its previous 37. When it comes to overall efficiency, that’s the path following difference.”

BUSTED: ANT® typically uses a vehicle’s existing safety laser scanner(s), positioned at the base of the vehicle.

Some AGVs that use natural navigation technology employ a dedicated LiDAR laser scanner for navigation. This sensor is usually positioned high up on the vehicle in order that it can ‘see’ as much of the environment as possible.

This sensor position usually signifies that a natural navigation system uses a ‘scan matching’ methodology rather than a ‘feature matching’ approach (see Myth 2). Since scan matching typically requires the identification of around 60% of a site’s features to work well, placing a scanner high up on the vehicle makes a lot of sense: it can simply see more of the site than when measuring at floor height.

However, with ANT® natural feature navigation this high scanner position is not required.

With ANT®, a vehicle’s position in the site map is determined using a mix of feature matching (matching permanent map references to the vehicle’s laser scanner data) and odometry, used to measure the vehicle’s change in position by computing its movement. As such, ANT® only needs to intermittently ‘see’ a few environmental references – walls, columns and so on – for precise vehicle localization.

Instead of the 60% of references needed by scan matching systems, ANT® performs with a high degree of accuracy if a vehicle’s scanners can only ‘see’ 5% – or even less – of the environment. In fact, a vehicle will continue moving along its route even if zero features are recognized during a period of a few seconds. Using a vehicle’s existing safety lasers for positioning – even if they are at ankle height and have relatively limited visibility – does not pose a problem.

In summary, placing navigation scanners high up on vehicles is useful, but only for systems that require a high level of references to work efficiently. It is feasible with ANT® also, but not really required.

1. Because it uses data from a vehicle’s safety laser scanners, ANT® natural feature navigation suits every type of vehicle form factor. By contrast, if a vehicle uses scan matching for positioning and therefore needs its navigation scanner to be placed high up, this means ‘underride’ (a.k.a. ‘mouse’) type AGVs cannot be developed.

2. Using a vehicle’s existing safety scanners instead of a separate navigation scanner means one less component for the vehicle maker to purchase and integrate. It also means one less point of potential failure.

BUSTED: ANT® driven vehicles can and do navigate outdoors.

While the development of outdoor AGVs does present distinct challenges – safety and positioning are trickier for example – this is possible with ANT®.

BUSTED: Both AGVs and AMRs can be, and are, driven by ANT®.

So which type of automated vehicle does ANT® navigation suit? The answer is both. Since ANT® offers virtual path following (a.k.a. guide paths) and obstacle avoidance modes, it can drive them all.

To illustrate the compatibility of ANT® with these two navigation modes, the video below features a mixed fleet of different brand AGVs (using virtual path following) and BlueBotics AMRs (using obstacle avoidance). All of these vehicles are managed by BlueBotics ANT® server software in a single project.

In this article, we’ve busted the most common myths about ANT® natural feature navigation by BlueBotics. If you have more questions about how ANT® compares to scan matching or continuous SLAM navigation, watch our on-demand webinar, Paths to Success. Or better yet, get in touch and our expert team will be glad to help.

GET IN TOUCH
WEBINAR 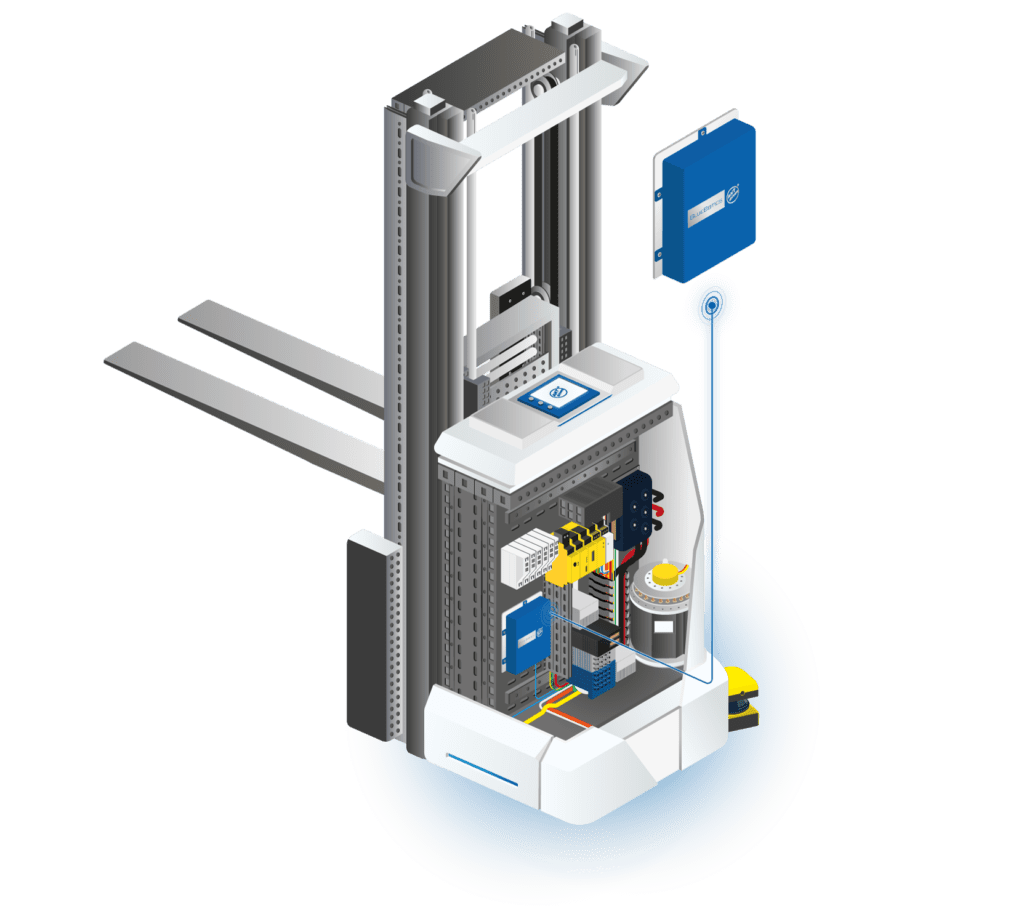